An increasing number of respiratory illnesses have been linked to e-cigarettes. The U.S. Centers for Disease Control is asking American vape-users to watch for symptoms such as coughing, chest pain, or shortness of breath

Update » Sept 6, 2019 » Another Patient Has Died From Lung Disease After Vaping » NY Times

The study, which was presented at the European Society of Cardiology (ESC) Congress 2019, found evidence that physical inactivity, smoking, high blood pressure, diabetes, and high cholesterol play a greater role than genetics for most patients under 50 with coronary artery disease (CAD).

“Our study provides strong evidence that people with a family history of premature heart disease should adopt healthy lifestyles, since their poor behaviors may be a greater contributor to heart disease than their genetics,” Sousa explained. “That means quit smoking, exercise regularly, eat a healthy diet, and get blood pressure and cholesterol levels checked.”

Occasionally I put together a list of the things that caught my attention as I surf the web trying to make sense of the world we live in. I send it out to those who might be interested.

You may want to sign up — it’s not as bad as you think.

END_OF_DOCUMENT_TOKEN_TO_BE_REPLACED

Researchers from Massachusetts General Hospital have found that higher levels of daily physical activity may protect against cognitive decline and brain tissue loss in adults who are believed to be at greater risk for Alzheimer’s disease. The best results were found among the research participants who took more than 8,900 steps per day.

“One of the most striking findings from our study was that greater physical activity not only appeared to have positive effects on slowing cognitive decline, but also on slowing the rate of brain tissue loss over time in normal people who had high levels of amyloid plaque in the brain,” said Jasmeer Chhatwal, M.D., Ph.D. of the MGH Department of Neurology, and corresponding author of the study.

The results suggest that physical activity might reduce b-amyloid (Ab)-related cortical thinning and preserve gray matter structure in regions of the brain that have been associated with episodic memory loss and Alzheimer’s-related neurodegeneration.

The underlying processes of Alzheimer’s disease can begin decades before clinical symptoms appear and is characterized by early accumulation of b-amyloid protein.

The new study is among the first to demonstrate the protective effects of physical activity and vascular risk management in the preclinical stage of Alzheimer’s disease, while there is an opportunity to intervene prior to the onset of substantial neuronal loss and clinical impairment.

“Because there are currently no disease-modifying therapies for Alzheimer’s disease, there is a critical need to identify potential risk-altering factors that might delay progression of the disease,” Chhatwal said.

The new research published in the journal JAMA Neurology.

The Stress of Separation and Detention Changes the Lives of Children

These actions have focused outrage and attention on the current U.S. Administration’s callous, racial, and white supremacist agenda.

This is the United States of America today. This is what is happening now. And there is a good chance this will continue for a while as there’s a good chance he will get reelected.

The horrific conditions under which immigrants and especially immigrant children are being held in US detention centers, rightly reminds us of the Nazi concentration camps. Lessons of the past have been forgotten.

What I’ve Learned: If their words don’t match their actions, trust their actions. More important than talk is how one lives their life and how they treat others.

What most concerns you about what we have read about and seen from these border facilities holding children?

Oh, God, where do I begin? I think—to cut through all of the noise, the politics, the back-and-forth on the details—there are just two core issues that are screaming out. One is the fact that the forced and abrupt separation of children from their parents is a huge psychological trauma and assault. The magnitude of the nature of the crisis for a child’s health and well-being cannot be overstated. Abrupt separation from primary caregivers or parents is a major psychological emergency.

The second issue is the prolonged placement of children in institutional settings. Obviously, the two are linked in this particular situation. From the perspective of what we know about children’s health and well-being, what we know about trauma, abrupt separation is one area where we have a lot of research and a lot of evidence about its consequences. But prolonged institutionalization is a separate area in which we have an equally deep research base and knowledge about how damaging that kind of setting is for kids. We are dealing with two very well-studied, serious assaults on the health and well-being of children.

People who spend at least 120 minutes a week with nature are significantly more likely to report good health and higher psychological well-being than those who do not visit nature at all during an average week, said the study published in the journal Scientific Reports.

“It’s well known that getting outdoors in nature can be good for people’s health and well-being but until now we’ve not been able to say how much is enough,” said lead researcher Mat White of the University of Exeter Medical School in Britain.

“The majority of nature visits in this research took place within just two miles of home so even visiting local urban green spaces seems to be a good thing,” White said.

“There are many reasons why spending time in nature may be good for health and well-being, including getting perspective on life circumstances, reducing stress, and enjoying quality time with friends and family,” said study co-author Terry Hartig of Uppsala University in Sweden.

A Sense of Purpose Could Prolong Your Life

Researchers from the University of Michigan School of Public Health analyzed data from nearly 7,000 individuals over 50 years old and concluded that “stronger purpose in life was associated with decreased mortality.” They believe that “purposeful living may have health benefits.”

The new research relied on data from individuals who enrolled in the American Health and Retirement Study (HRS)—longterm research that looks at a cross-section of subjects over time. The original research measured participants’ psychological well-being in 2006, their physical health and, subsequently, causes of death by 2010. The new analysis found that those whose psychological questionnaires reflected a lack of purpose were more likely to die than those who had “a self-organizing life aim that stimulates goals.”

In fact, people without a purpose were more than twice as likely to die than those with an aim and goals. Purpose proved to be more indicative of longevity than gender, race, or education levels, and more important for decreasing risk of death than drinking, smoking, or exercising regularly.

From the Harvard Heart Letter:

“Tea is a good source of compounds known as catechins and epicatechins, which are thought to be responsible for tea’s beneficial health effects,” says Dr. Howard Sesso, associate professor of medicine at Harvard Medical School and associate epidemiologist at Brigham and Women’s Hospital. These compounds belong to a group of plant chemicals called flavonoids. Research suggests that flavonoids help quell inflammation, and that in turn may reduce plaque buildup inside arteries. Green tea has slightly higher amounts of these chemicals than black tea. Both black and green teas also contain modest amounts of caffeine, ranging from about 20 to 45 milligrams per 8-ounce cup. That’s roughly half the amount of caffeine in the same amount of coffee.

Short-term studies have shown that drinking tea may improve vascular reactivity—a measure of how well your blood vessels respond to physical or emotional stress. There’s also evidence that drinking either black or green tea may lower harmful LDL cholesterol levels. Blood pressure may also dip slightly in people who drink tea, but results from these studies have been mixed.

Several large, population-based studies show that people who regularly drink black or green tea may be less likely to have heart attacks and strokes. However, people who drink tea tend to be different from people who don’t drink tea. “We can’t quite disentangle whether it’s their tea drinking or something else those people are doing that lowers their risk of cardiovascular disease,” explains Dr. Sesso. “Some experts believe that tea may have cardiovascular benefits, but it’s not considered a slam-dunk proposition.”

According to the OECD (Organisation for EconomicCo-operation and Development), these are the latest adult obesity numbers available:

Who lives alone in Canada and how does that impact their health and wellbeing?

Questions continue to be raised about the possible impacts of living alone on the prevalence of social isolation and loneliness in society.

Statistics Canada has released a study that looked at the Canadian population living alone, using data from both the Census of Population and the General Social Survey on Family. Here’s some of what they found. 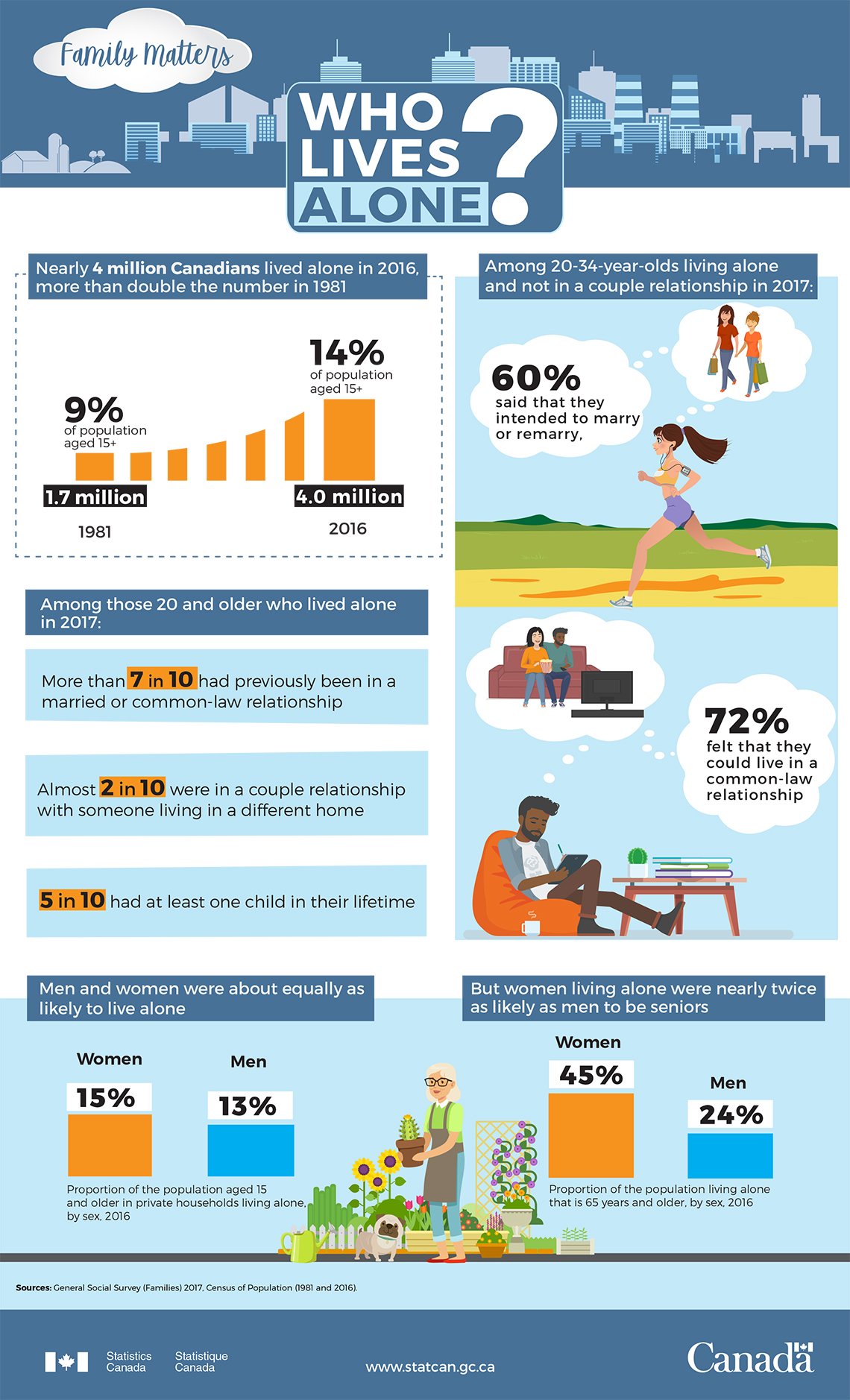