Video: Moments and memories of the 2018 Winter Olympic Games in PyeongChang

Tessa Virtue and Scott Moir treated the fans in South Korea to what is likely their final skate on Olympic ice, sending a distinctly Canadian message back home.

For their exhibition program, Virtue and Moir skated a touching and heartfelt routine to the song Long Time Running by The Tragically Hip.

The program was designed to honour The Hip’s frontman, Gord Downie, who died in October after a battle with brain cancer.

“When I think about Gord and I think about the Hip and what they’ve been able to do,” Moir said recently, “it’s kind of the soundtrack to being Canadian almost.”

For their exhibition program, Virtue and Moir skated a touching and heartfelt routine to the song “Long Time Running” by Canadian rock band The Tragically Hip. The program was designed to honour The Hip’s frontman, Gord Downie, who died in October after a battle with brain cancer.

“When I think about Gord and I think about the Hip and what they’ve been able to do,” Moir said recently, “it’s kind of the soundtrack to being Canadian almost.”

Norway worries they are winning too many Olympic medals

Norway is so worried about dominating cross country skiing and other sports that they offer aid to other countries to compete against them, for fear the rest of the world will lose interest in those sports they love.

Surpassing its own lofty expectations, Norway has delivered the greatest performance in the history of the Winter Games, winning a total of 38 medals, 13 of them gold. A nation of only five million people has crushed all comers, including sports behemoths like Germany and the United States, in the events Norwegians care about the most.

Is it time for permanent Olympic venues? Why almost no one wants to host the Games anymore

Pyeongchang, South Korea, built a brand new Olympic stadium to host the Winter Games this year. The 35,000-seat stadium cost $109 million to build. And it will be used just four times before it’s demolished.

It’s become too expensive to stage either the summer or winter Olympic Games. Extravagant installations, infrastructure upgrades, security, etc. do not make debt laden Olympics investments for the host state.

The costs of hosting the Olympics have skyrocketed. The 2012 Summer Games in London cost over US$15 billion. The 2014 Winter Olympics in Sochi, Russia cost an estimated US$22 billion to build and stage. While there was probably corruption involved in Russia’s inflated hosting costs, the economic benefits are far from clear and this has led to fewer countries interested in playing host.

For the 2024 Games, the International Olympic Committee decided to do something unprecedented: Instead of choosing between the only two bidders, Paris and Los Angeles, it decided to award Paris the 2024 Summer Olympics and give Los Angeles the 2028 Summer Olympics. Experts say the IOC decided to give them out at the same time for a simple reason — it was afraid no city would want to host the tournament by the time the 2028 bidding started.

Since 1960, no Olympic Games have come in under budget. In fact, nearly half of them end up costing more than twice as much as expected. Additionally, cities tend to find that most of the stadiums, fields, courts, and other facilities that they built for the games are simply useless after the Olympics are over. Their enormous size makes them difficult for athletes to use and for fans to fill up.

The Games are also suppose to attract tourists and showcase the host city while celebrating the best athletes and athletic competition. However, the empty seats most venues at the Pyeongchang Olympics suggest that hasn’t happened for South Korea.

With increasing costs and climate change affecting the Winter Olympics, is there an argument to be made for permanent Olympic installations?

The Economics of Hosting the Olympic Games – James McBride, Council on Foreign Relations

When Canadian figure skater Kaetlyn Osmond won the bronze on medal today in Pyeongchang, it was the country’s record 27th medal.

Canadians have won 10 gold medals in South Korea so far, to go along with eight silver and nine bronze.

The 27 medals also represent Canada’s second biggest haul for any Olympics ever, behind the 1984 Summer Games in Los Angeles where the Soviet Union and 15 other countries boycotted. Canada won 44 medals in Los Angeles.

With a couple more days of competition to go, Norway, with 37, will surely finish first on the overall medals-won table. However, Canada is currently in second, which would also be a best-ever result. 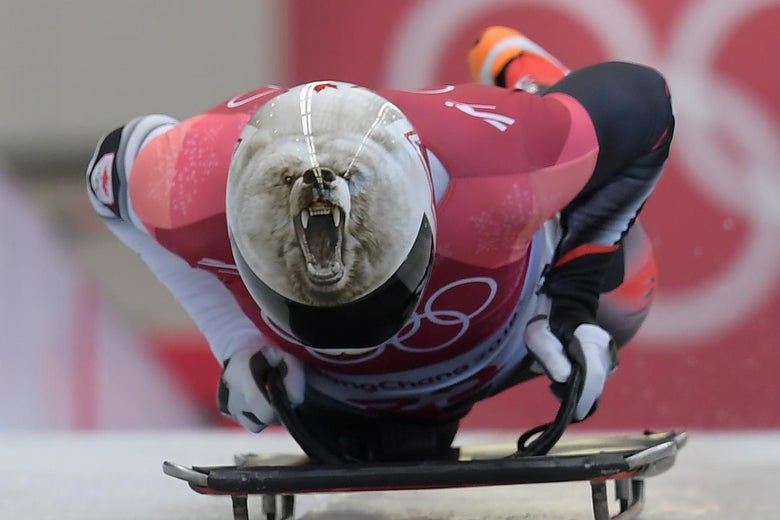 “I’ve painted helmets for other athletes before, but with the Olympics, it’s just different. It unites the world and it’s an exciting time for such a big stage.”

How an artist made that awesome Olympics skeleton helmet with a roaring grizzly bear – Josh Levin, Slate

Papadakis/Cizeron (FRA) are in second place with silver and Shiutani/Shibutani (USA) in third with bronze.

Canadian skier Cassie Sharpe, who suffered a broken thumb in her final pre-Olympic competition in late January, put down incredible runs in the halfpipe for top place with a score of 95.80. France’s Marie Martinod won silver.

Marianne St-Gelais, Kim Boutin, Valérie Maltais and Kasandra Bradette missed out on what appeared to be a guaranteed medal in the 3,000-metre relay final after being penalized.

Korea bows out of men’s hockey with tears and cheers as Finland edges them to set up a meeting with Canada. The United States beat Slovakia.

Here is Tessa and Scott’s short program from Monday, February 19.

Dancing to Samba, Rhumba, Cha Cha, they scored 44.53 on their technical elements:

The next night was Tessa and Scott’s last Olympic skate. Canada’s flag-bearers defeated their rivals from France by less than a point. They later said that prior to their performance they had no idea the French team had just set a world record in their skate.

A golden day for legendary Canadian Olympians Tessa Virtue and Scott Moir, who set another world record in figure skating free dance with a total score of 206.07 at the 2018 Olympic Winter Games in Pyeongchang, South Korea.

Virtue and Moir received a career-best score of 122.40 for their historic free dance, performing to Moulin Rouge version of Roxanne and reached the podium with their second gold and a third Olympic medal.

They are the second pair in the world to have won back-to-back Olympic gold, joining Russia’s Pasha Grishuk and Evgeni Platov, who earned theirs in 1994 and 1998.

Here is an interviewed of the two by CBC’s Heather Hiscox after receiving their gold medals.

Tessa Virtue and Scott Moir have won ice dance gold after an overall record-breaking performance at the 2018 Winter Olympics. They spoke with the CBC’s Heather Hiscox about their big win in Pyeongchang.

Day 9 of the 2018 Olympic Winter Games in Pyeongchang, South Korea saw Canadian freestyle skier Alex Beaulieu-Marchand land on the podium with a score of 92.40 and a bronze in the men’s ski slopestyle final. Norway’s Braaten Oystein took gold with the top score of 95.00, followed by American Nick Goepper who earned silver with a score of 93.60.

Canada secured a spot in the quarter-finals after a 4-0 win over South Korea in men’s hockey but in curling Sweden stole a win over Canada 5-2. Women’s curling team turned things around with a 10-18 victory over Switzerland.

Europeans stole the show on the mountain and plains as Austrian skier Marcel Hirscher became the second athlete to earn two individual golds in Pyeongchang after winning the men’s giant slalom. Hirscher who also won the men’s alpine combined and biathlete Laura Dahlmeier are the only Olympians so far to have done so. Hirscher has a shot at more.

Oleksandr Abramenko won gold in freestyle skiing aerials while Olivier Rochon, the only Canadian to reach the men’s aerials finals, finished fifth and did not make it to the podium. The men’s team pursuit speed skaters failed to advance to the semis. On the women’s side, Marsha Hudey was 10th and Heather McLean finished 14th in the women’s 500-metre finals while Nao Kodaira of Japan took the top spot followed by Lee Sang-Hwa (KOR) in second and Karolina Erbanova (CZE) in third.

Norway won their 11th cross-country medal and 5th gold in the men’s 4×10-kilometre relay while Canada, competing without Alex Harvey after he dropped out of the event, finished ninth.

Canada’s short track skaters had a great day 8 at the 2018 Olympic Winter Games in Pyeongchang, South Korea. Samuel Girard won Canada’s first short track gold at his first Olympics in the men’s 1000 m final and becomes the first North American skater to win gold at this distance. Veteran Canadian speed skater Charles Hamelin missed the final after being assessed a penalty in the semifinal. On the women’s side, Kim Boutin who was the target of online threats from Korean supporters after her first bronze, captured another one winning Canada’s first-ever medal in the 1500 m.

Canada’s Patrick Chan finished 9th in his final Olympic figure skating appearance with 173.42 points skating to Jeff Buckley’s Hallelujah, while Keegan Messing placed 12th as he skated to Medley, another Charlie Chaplin number, and scored 170.32, his new season’s best by about 9 points. Yuzuru Hanyu of Japan however won back-to-back at the 2018 Olympic Winter Games as he defended his Olympic title in the men’s free skate with another powerful performance to Seimei (soundtrack) by S. Umebayashi.

In the men’s hockey, 3-2 in a shootout and in the women’s, Finland beat Sweden to move on to the semifinals.

In women’s curling Rachel Homan ended her losing skid and rebounded in a big way against the United States leading Canada to a dominant 11-3 victory while Kevin Koe’s Canadian rink lost its first game.

More gold for Britain’s Lizzy Yarnold who she set a new record in women’s skeleton and won by a huge margin, Switzerland’s Sarah Hoefflin in freestyle skiing slopestyle, and Poland’s Kamil Stock in men’s in ski jumping large hill.